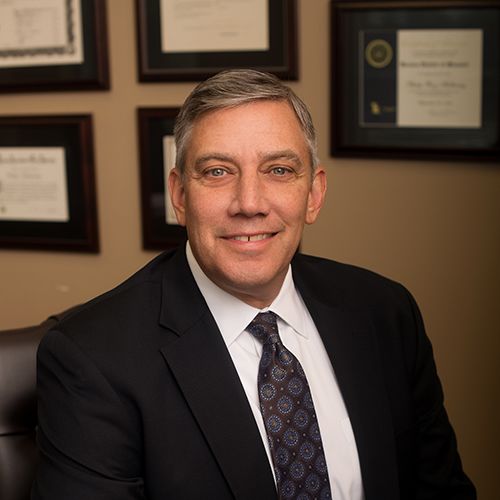 Phil is 55 years old and was born and raised in Kansas City, where he attended North Kansas City High School. He then attended William Jewell College in Liberty, Missouri, and earned a double major in business and communications.

In his over 30 years of practice, Phil has worked primarily on cases involving vehicular accidents, semi-truck accidents, motorcycle accidents, and claims involving dangerous premises and dangerous products. His recognition by his peers in the legal community with a Martindale-Hubble rating of “A/V”, which is the highest given, sets him at the top of his profession in both legal ability and professional integrity.

One of Phil’s passions has been representing children involved in various accident claims. He is also active in the community regarding children’s issues. Phil was a member of the North Kansas City School District Board of Education from 1995 to 2011 and has volunteered his time and served on Boards of various not-for-profit charity organizations. In 2006, he received the President’s Award of the Kansas City Metropolitan Bar Foundation for his work with elementary-age children in an anti-bullying program. Phil is also a deacon at the Nashua Church of Christ where he teaches youth bible study groups.

Most importantly, Phil has a family. He has been married to his wife Kristen for over 30 years and they have three adult children who live in the Kansas City area. When not practicing law or volunteering his time in the community, you will find Phil golfing, hunting, and enjoying time with his family.